What does a bodybuilder need to know about running?

Running for a bodybuilder – how much weight does he play? Chris Gethin has radically changed his approach to cardio in recent months, but if you think that he, too, wastes time in vain, you are greatly mistaken. That’s what he says about what every athlete should learn!

Many athletes believe that running and strength training are mutually exclusive: do one thing, and it is unlikely that you will do another.

At the beginning of this year, I decided to refute both arguments. During the training of my first Ironman triathlon competition, which I recorded in the Man of Iron video series, I continued to train as a bodybuilder. Moreover, I continued to pursue my own bodybuilding goals.

Like most bodybuilders, I am much harder than the average athlete and for my endurance training I had to adjust my training accordingly.

Lesson 1: Muscles do not burn!

I live, train with weights, run and make sure that with the right diet and exercise regimen it is possible to “have it all”. Of course, if someone does nothing except a large amount of endurance training, neglects work in the gym and follows a low protein diet, this will lead to muscle loss. And, as usual, my daily ration is saturated with high-protein products, consists of an increased volume of complex carbohydrates and moderate fat content.

I still have six meals a day, as well as whey protein immediately after exercise and a portion of casein before bedtime. The first one gives me “fast” proteins, which makes it an ideal choice for recovery after a workout. The second gives the opposite: a mixture of slowly released amino acids that gradually nourish my muscles overnight.

Lesson 2: Running for a bodybuilder – a great addition when practicing with “iron”!

Most of the bodybuilders with whom I trained are strong, but they lack endurance. This usually has a significant impact on their ability to overcome the intensity barrier that I am pursuing. Increased stamina significantly increased my lung volumes and effective heart function, and I found that this affected the progress of my results in the gym.

When I leave the locker room, I feel a much better recovery: my heart can pump blood to damaged muscle fibers more easily, helping to remove toxins and lactic acid while continuously transporting nutrients to localized areas of damage.

Lesson 3: Running for a bodybuilder is health!

My goal is to live to 100. On a regular basis, I do blood tests as well as food allergy tests in order to assess how current habits affect my health. I’m happy to tell you that since I’ve been doing endurance training in Ironman training, my tests are better than ever. 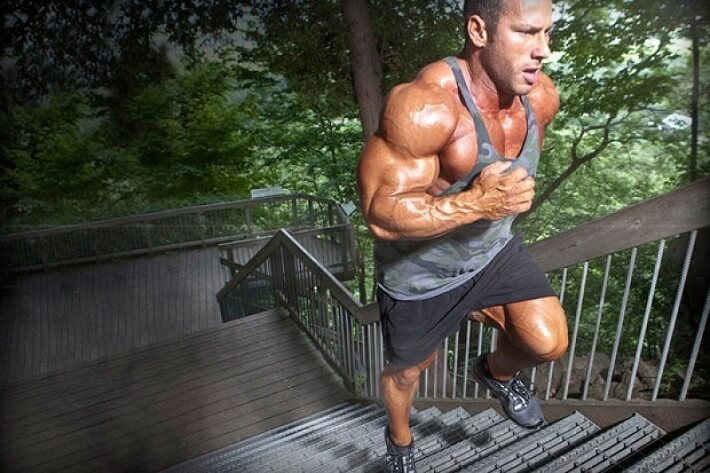 Undoubtedly, running gave obvious health benefits to my heart, lungs, blood pressure, cholesterol levels and even intestinal function. I am the person who believes that health should always be the number one priority.

Lesson 4: Running for a bodybuilder must be right!

The benefits of running are obvious to you. However, since there is someone who is 20–30 kg heavier than the usual enduring runner, you need to learn how to help your body cope with stress, and specifically with the load on joints and ligaments. I mean landing on the front of the foot, without touching the heel to avoid excessive stress on my Achilles tendons and knees. Because my hips are bigger than usual, they tend to fatigue more quickly. This makes the emphasis on right kicking even more important.

I also began to pay special attention to training the biceps of the thigh. The goal here was to have my legs move forward when I run long distances instead of jumping up and down like a calf. I believe that every runner can benefit from stronger thigh flexors. I also do most of my runs on softer surfaces.

But this is just my lower body. What happens above the belt also matters when working. First of all, I avoid excessive movement with my hands and try to give my body as much stability as possible during the whole distance.

Do not run away from health!

There are so many advantages of running that it is a shame that many of my iron brothers do not use them. Let my article help you become a universal athlete. This is a huge plus for your health, it mentally stimulates, and the challenge creates character!

Posted on March 20, 2019 admin
Learn how to choose the right cutting steroids and adjust your diet. Thanks to the cutting cycles, the builders have the opportunity to achieve [...]