Improve the appearance and strength of your deltoids with these scientifically proven exercises that will put your shoulders head and shoulders above the rest.

The shoulders play a key role in almost all upper body exercises. Because they are critical in all areas of body function, maximize range of motion, and potentially make you bigger by bulging under your shirt like two huge cannonballs, strong shoulders are essential for maximum performance and a well-built, aesthetic physique. This article will help you maximize shoulder development using a scientific method.

Before starting a workout, it is very important to know about the muscle group that you are training. The shoulders are composed of large deltoid muscles: the anterior, middle, posterior and small rotary ligaments (capsular ligament, transverse humeral ligament), which fix the joint. The pivotal ligaments in turn attach the other four muscles: the minor, infraspinatus, supraspinatus, and subscapularis, which are responsible for all upper and rotational movements in the shoulder.

The deltoid muscles are responsible for abducting arm movements, pushing the arm away from the body along the frontal plane.

The anterior deltoid muscles are involved in movement when raising straight arms in front of you forward. Also, the anterior deltas work in pushing movements in conjunction with the subscapularis, pectoralis and lats to rotate the humerus inside. For example, when you are doing the standing dumbbell press.

The middle deltas perform the main abduction function of the shoulder, when the shoulder rotates inwardly during lateral arm lifts. Also, the middle deltas are included in the work when performing pulling movements, for example, when we do the front longitudinal broach with a wide grip.

The posterior deltoid muscles are strongly involved in the work when performing abductive movements of the arms when the trunk is tilted forward. Those. the muscles of the rear deltas should be higher than the other shoulder deltas in the vertical plane. Also, the main function of the back delta is responsible for pulling movements, it works as an assistant when performing exercises such as barbell row, T-bar row, etc. 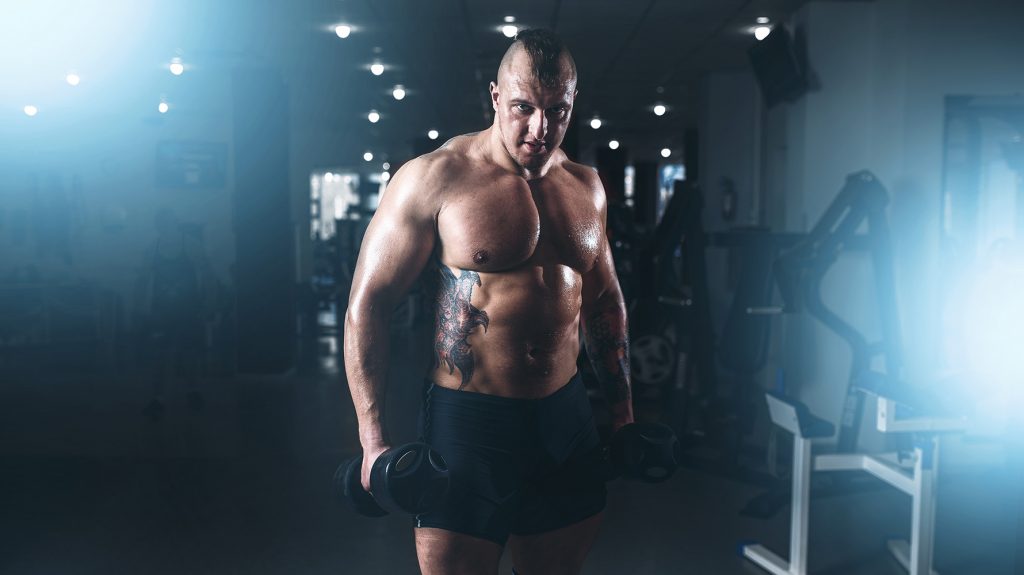 The seated bench press is overrated. While the standing press can cause you to have a lower maximum repetitions, it stimulates shoulder growth better. While you will be lifting less weight, the standing press requires more stability, so you will actively strengthen your torso and enhance your entire body aesthetic as you hone your shoulders.

There is no doubt that the full range dumbbell press is the best exercise you can do to maximize the growth of your anterior deltoids. In a study conducted at the University of Padua, it was found that the use of a wide range of motion, when performing the Army Press while standing, extending the elbows to 180 degrees, led to a significant increase in the activation of electromyogram (EMG) of the pectoral muscle, anterior deltoid, middle delta, posterior deltoid , upper trapezium, middle trapezium, long and shallow triceps heads.

If you don’t fully extend your elbows during shoulder presses, you will be surprised. Feel free to lose weight, use your full range of motion, and reap the benefits of working smarter and harder by following these steps:

Fix and slowly return the weight to its original position.

Skipping the simulators. A recent study showed that EMG activity for the posterior deltoid and infraspinatus muscles was greatest when performing reverse stretches of the hands lying down (palms facing forward) compared to the reverse grip (palms down). While you might be tempted to jump into a reverse lift, you are better off using free weights and a bench to do dumbbell breeds. Not only does the free weights allow you to keep your arms in optimal position, the movement also isolates the rear deltas better and includes more stabilizers than machines.

This exercise targets the rear deltas while pressing down on the middle and front heads. This is a great option to diversify your workout routine. Be sure to choose a light weight to perform the correct movements and maintain proper neuromuscular connections to maximize the benefits of each rep.

Experiment, do the standard side raises in a new way. Using kettlebells will add extra stress to your forearms and shoulder stabilizers. It is important to focus on contraction of the deltoid muscles and in no case allow the impulse to capture the movement, performing due to inertia.

Perform these movements, keeping the kettlebell straight so that it hangs clearly down to the floor when lifting.

If you’ve never done this version of the pull-up, you are missing out on a lot. Try it. This will not only develop your lats, but it will also give a boost to your delts, it will also engage your pectoral muscles.